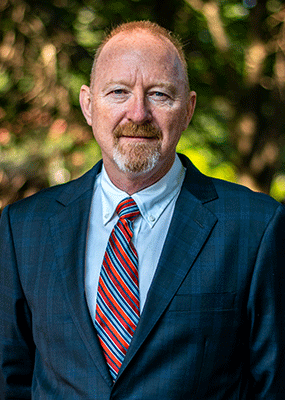 A Judge once remarked to another attorney “Roy is not afraid of a good fight, in fact, trial is the closest thing he can find to combat without getting shot at.”

Roy took that Judge’s comment as a true compliment to himself and his parents who taught him to work hard, never quit, and always defend those who cannot defend themselves (Semper Vallo).  It is also a testament to many years spent in the Marine Corps, including multiple combat tours.  After a few years in the Marine Corps, college was easy.  Roy maintained duties as a Mortar Section Leader with India Company 3rd BN, 23rd Marines training at Camp Robinson, AR while enrolled at the University of Arkansas at Little Rock, studying Criminal Justice completing 83 hours of college credit in fifteen months before being accepted to Baylor Law School for the Spring Class of 1998.

Immediately after taking the Texas Bar exam in 2000 Roy opened a solo law practice in Kerrville, Texas then picked his first Felony Jury just a few months later in front of the same Judge quoted above. In the summer of 2003 he joined the firm of DeHay & Elliston, L.L.P. in Dallas, Texas working on complex litigation cases involving premises liability, product defects (building products, and pharmaceuticals). and toxic torts for several years before resurrecting Reeves Law Firm focused on Civil, Criminal and Family Law litigation.

Roy joined the Meazell firm in 2021 and currently serves clients with real estate, personal injury and consumer litigation issues.  Roy is a member of McDermott Road Church of Christ and in his spare time you can find Roy riding his Harley, flying airplanes, scuba diving, practicing his archery and marksmanship skills, or spending quality time with friends.

4th Marine Division – Mortar Section Leader – Responsible for the training and deployment of three mortar teams and associated weapons in combat operations and the development of fire control plans.

Additional Achievements – Reeves has argued 3 times before the Court of Appeals, won a double reversal on a capital murder case, won a family law appeal, and completed over 400 depositions.

The Meazell Firm is located in Plano, TX and serves clients in and around Frisco, Allen, Plano, Mc Kinney, Prosper and Collin County.

Attorney Advertising. This website is designed for general information only. The information presented at this site should not be construed to be formal legal advice nor the formation of a lawyer/client relationship. [ Site Map ]

See our profiles at Lawyers.com and Martindale.com